Two months into the current school year, teachers and administrators at Reynolds Middle School in Fairview recognized a problem.

Students were more disruptive in class. Fights were breaking out and teachers observed a heightened level of dysregulation and stress among students. Teachers there said the conditions inside classrooms had reached a boiling point, preventing them from effectively teaching.

In an attempt to regroup and address the school's social climate, the school closed for nearly three weeks in mid-November, sending students back to distance learning temporarily.

"We are finding that some students are struggling with the socialization skills necessary for in-person learning, which is causing disruption in school for other students," Reynolds School District Superintendent Danna Diaz wrote in a message to families, saying isolation and shifts in learning methods brought on by COVID-19 had taken a toll on student and staff wellbeing.

While the solutions deployed in Fairview to address a fractured school climate may have been unique, the issues are not. Since the beginning of the 2021-22 academic year, school districts throughout Oregon have said students are exhibiting more signs of pandemic-related stress and inappropriate behavior.

At Roseway Heights Middle School in Portland last fall, repeated fights caused lockdowns and lockouts and students reported sexual harassment from their peers, leading to a student walk-out and calls for more resources there.

In December, a Portland's Roosevelt High School went on lockdown after one student reportedly tried to rob another student off-campus. That same month, some schools in the Portland metro region had to implement emergency safety measures after a social media trend encouraged students to call in bomb threats and school shootings.

Teachers at nearly every grade level have described this as the most challenging year of their career. They say student behavior in classrooms is notably different this year.

Melissa Evers, a seventh-grade teacher at Lakeridge Middle School in Lake Oswego and mother of two, said students and teachers are exhausted. Evers said common behaviors she's noticing include heightened anxiety, stress, and exhaustion. And her seventh graders are also showing behaviors common in fifth graders, like immaturity, not understanding boundaries, or handling conflict as if they are still "on the playground."

Evers said students are having a hard time forming connections (i.e. making friends) because they missed out on nearly two years of developing social skills.

"Students need routine, they need consistency, and they thrive under that," she said. "So, by completely removing that, what we see generally is either inward behavior, and that's a lot of anxiety, and shutting down socially. Then we see extreme outward behavior — like acting out in very immature ways because their development was arrested (during CDL)."

While parents, state leaders and school administrators lauded the return to full-time in-person learning in fall 2021, students say the abrupt transition back to school was a seismic shift.

"Before COVID it seemed like, 'oh, let's go hang out with friends, and now it's like, social distancing kind of takes away the social part. It's more just like, a chore," said Case Cavanaugh, a senior at Cleveland High School. "When we were in online learning, a lot of rules weren't really enforced. The grading was different. A lot of people lost motivation, I think, to be back in school. A lot of goals were lost."

More students at risk of self-harm

In Portland Public Schools, the district has logged 422 student suicide screenings so far this year—more than twice the number logged at this time in 2019-20, before the pandemic caused schools to close. In Beaverton School District, the number of students who reported thoughts of self-injury or were considered at-risk went from 329 in late February 2019-20 to 571 by mid-February 2022. Tigard-Tualatin School District has also seen more referrals for what it calls "care coordination" by counselors. Last year, the district logged 143 students referred for care coordination. This year, that number jumped to 213 students. Suicide screenings there are also up, from 22 students last year, to 77 students so far this year.

The screenings and interventions are part of a state-mandated student suicide prevention plan that came from Senate Bill 52, also known as Adi's Act. Adi's Act was passed by Oregon lawmakers in 2019 following the death of Adi Staub, a transgender teen who died by suicide in 2017. Prior to the adoption of Adi's Act, Oregon recorded 129 kids and young adults who took their own lives in 2018, making it the leading cause of death by youth age 10 to 24 that year.

While the increase in screening and intervention is alarming, it could also signal an improved landscape of resources and services for students.

Student mental health specialists in Portland point out that educators are now better trained on how to recognize when a student needs intervention and many schools have added social workers, counselors and school psychologists with funds from the Student Success Act.

Experts say the behavioral issues reported so far this school year are largely due to the pandemic.

Jim Sanders is Lake Oswego School District's clinical psychologist specializing in children's behavioral and social-emotional skills. He said that the school district has seen a significant uptick in students requesting appointments with school social workers for depression and anxiety.

"With high schoolers you see heightened anxiety, depression, and with younger students they have missed out learning social cues.

"A dirty, but perfect example is when you walked into the elementary school bathroom at the very beginning of the school year — you would think that a bomb had gone off with trash. Kids would go and wash their hands then throw towels in the urinals or on the ground. It wasn't like they were trying to get away with something, they simply didn't know because they haven't had to use the bathroom in public for two years."

Much of the behavioral issues are stemming from students in middle school, some of whom hadn't been in a classroom with peers full-time since elementary school. 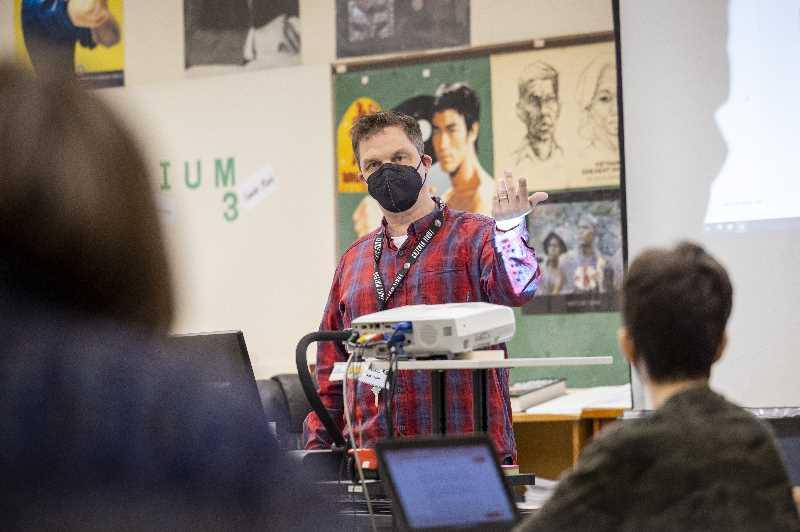 "I think it's because of the developmental age. If we take a 13-year-old the last time that they were full-time in school in person was when they were in fifth grade. And those are big developmental jumps," said Leslie Rodgers, a safety and wellness specialist with Beaverton School District.

On top of stunted social development and maturity, some child psychologists have observed changes in brain functioning.

Dr. Tere Linzey is an education psychologist based in Southern California. She runs a private program called Brain Matterz, which analyzes and improves how children learn. Dr. Linzey said she's seen a marked decline in students' overall brain function over the past two years.

"Parents are seeing so many deficits and children are having difficulty they've never had in the past," Dr. Linzey said, noting "slower visual and auditory processing speeds", and lags in working memory among kids and teens she works with.

"We're seeing five times more students than I would in a typical 'non-COVID' year," Linzey said.

Educators and child psychologists say it's important to consider the impact of increased screen time on students over the past two years. During distance learning, kids were at their computers every day. Some were also playing video games before or after digital learning. Pair that with constant access to cell phones for teens, and some say the effects are obvious.

Dr. Linzey suspects there is a thing as "too much" when it comes to television and computers.

The good news? Dr. Linzey said retraining young brains to learn in a traditional classroom setting can be done, with thoughtful approaches.

In Estacada, a middle school is supporting students experiencing stress is by encouraging visits to the wellness center, where they can work with a paraeducator to find strategies that work for them, like movement or deep breathing."The need for it has increased, but the number of students seeking it out proactively has also increased," Amelia Gundlach, a counselor at Estacada Middle School, said.Additionally, some districts implemented a school climate reset day. In some cases, that was a staff development day where teachers were trained on social-emotional learning and conflict de-escalation.In Estacada, it was the first day back after a long Presidents Day weekend, where teachers reviewed behavioral expectations with students."We've been focused on meeting students where they're at, and reintroducing expectations," Gundlach said.

In Central Oregon, Crook County schools have leaned more heavily on tracking the academic progress of students to intervene if they fall behind.

Communications Director for CCSD, Jason Carr, commented, "There is no substitute for in-person instruction, and our school board and district leadership know that students perform better when interacting directly with teachers and their peers in the classroom. From the pandemic's beginning, our goal was to develop a solid COVID-19 safety plan and bring students back without delay to avoid learning loss."

He added that the high school team also developed an internal system that tracks academic progress and alerts administrators when students are missing credits or failing a class. Teachers and staff then provide extra support to ensure struggling students have opportunities to get back on track.

"Undoubtedly, both of these efforts were significant factors in our best-in-the-region graduation rates," emphasized Carr of their major milestone of 98.17% of students graduating in 2021 with a high school diploma.

Elementary schools have also kept students in classrooms the entire 2021-22 school year. Art instructor Janelle Deedon, who teaches K-5 art for Steins Pillar Elementary gave insight into how important the in-person learning has been to her students.

"Our district worked hard to keep us learning in person this past year. Because of that, we have been very fortunate," Deedon indicated.

She uses art to help students learn to work through their emotions.

"In my art room, all students are encouraged to express their feelings and emotions through their work. I believe that using the arts (music, fine arts, drama) to express oneself is a good lesson for life," Deedon said. "When it is hard to put feelings and emotions into words, we can sometimes express them through art. We have practiced this during the pandemic and will continue building this skill."

Central Oregonian reporter Ramona McCallister is one of several Pamplin Media Group reporters who contributed to this report.

You count on us to stay informed and we depend on you to fund our efforts. Quality local journalism takes time and money. Please support us to protect the future of community journalism.