Human rights advocates say they're "shocked" by a suggestion from the West Australian government that hats and hydrolytes could negate the need for air conditioning at a jail in the state's north.

Long-held concerns about prisoner welfare in the Pilbara town of Roebourne gained national attention earlier this year, after the town recorded a record temperature of 50.5 degrees Celsius.

The Aboriginal Legal Service of WA (ALSWA) has spent years advocating for the installation of air conditioning and has labelled the lack of state government action as a "flagrant breach of human rights" and "inherently discriminatory", given the high proportion of inmates who identify as Aboriginal.

The frustration felt by advocates has been exacerbated in recent weeks by an official response from Corrective Services Minister Bill Johnston.

In a letter to the ALSWA, obtained by the ABC, Mr Johnston listed the ways Roebourne Regional Prison (RRP) managed "thermal discomfort", which included giving prisoners sunscreen, wide-brimmed hats and providing hydrolyte drinks for purchase at the canteen.

"We had a feeling of disbelief," ALSWA lawyer Alice Barter said after reading the letter.

"At the time that RRP was constructed in 1984, the Department of Justice assessed the use of air conditioning at the facility against the regulatory and community standards at the time," the letter said.

"In 1984 air conditioning was not the standard in the local community or a feature of most homes and it was not included in the building plans.

"Relative to other forms of temperature control, air conditioning is likely to require extensive retrofitting for efficient operation."

Ms Barter said prisoners in Roebourne often felt like they were sleeping in an oven. 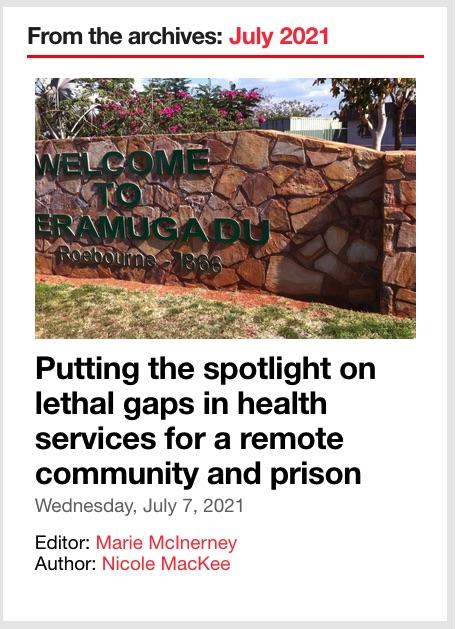 "They've told me that they wake up in a pool of sweat because they sweat so much overnight and this can lead to dehydration," she said.

"They've told me that they're worried for their own health and particularly for the health of the elderly people in the prison.

The Corrective Services Minister's letter to ALSWA also listed "climate control initiatives" that have been introduced at RRP including ice machines, chilled water fountains, shade sails and heat-reducing paint on the prison roof.

Ms McNeill received an almost identical response from the Corrective Services Minister after writing to him with her concerns about prisoner welfare at the jail.

"I was quite shocked to see those particular quick fixes pointed to rather than addressed the key issue that we had raised," she said.

"These are minimum rules for the treatment of prisoners that all governments across the world have to make to ensure that people in care are treated humanely.

"I think it's pretty alarming to see this issue just kind of disregarded by the government."

Jail temperature a focus of next inspection

WA's independent prison watchdog said Roebourne was in the hottest climatic zone of any Australian prison and had repeatedly recommended air conditioning in all cells.

"I think the recommendations have always been taken seriously, they just haven't had the motivation, or the resources, or commitment, to actually implement effective change," said Inspector of Custodial Services Eamon Ryan.

"There has certainly been far greater public interest in this as an issue and that's spawned by that very hot day in January.

"It's certainly prompted far more people to raise it more strongly in the prison, and I'm talking about prisoners, but also some staff."

Mr Ryan said while not all staff were supportive, many saw the impact the heat had on inmates.

"If you get a bad night's sleep, you're grumpy the next day," he said.

The Office of the Inspector of Custodial Services will be in Roebourne this week carrying out another routine inspection of the jail.

An inspection report is expected to be table in State Parliament in July 2022.