‘I feel like I’m back in jail’: Life inside NYC’s broken shelter system

Cockroaches in the food and mice crawling on beds. Constant assaults and thefts. Sanctuaries that feel like jail cells.

This is what life is like inside three major Big Apple homeless shelters and why many indigent residents say they’d rather take their chances on the street over entering a system they say is broken.

“I used to leave here after bed check and go sleep on the A train going to Far Rockaway. You can’t really sleep here. It ain’t safe,” Sean McAloney, a 50-year-old US Navy veteran, recently told The Post outside of the notorious 30th Street Intake Center where he’s lived for the last six months.

“Last night, this kid who hurt his back was in the shower and this big dude came in and started pressing up on him, naked. He wouldn’t leave. That’s scary! It’s not going anywhere good. That’s why I shower fully clothed,” he continued.

“The trains are the best place to get some sleep, the safest place. At least they were.”

McAloney’s fears — echoed by other homeless New Yorkers in more than a dozen interviews — will be one of Mayor Eric Adams’ biggest challenges as he seeks to fix violent crime and homelessness underground with his new subway safety plan, which kicked off on Feb. 21.

In the program’s first week, roving teams of social workers, cops and clinicians trawling through major subway stations and train lines engaged with 1,000 homeless people. But just 22 of them accepted a shelter bed, City Hall said.

The new plan calls for 30 such teams, who are supposed to work together to tighten enforcement of MTA rules and convince homeless New Yorkers to head to shelters, but on the first day of the initiative, only nine were deployed. Over two weeks after the program started, City Hall said that number has risen to 12 – six teams across two shifts – but has repeatedly refused to provide specifics.

While Adams has made clear it’ll take time to solve a problem that has perennially plagued the five boroughs, many homeless New Yorkers living on the streets said their minds are already made up — they’re not entering the shelter system until it’s been fixed.

“People do not feel safe in congregate shelters. They were dangerous from a COVID perspective and they don’t give people stability.”

The Post spoke to more than a dozen New Yorkers living inside of large, barracks-style congregate shelters where safety concerns have long reigned. They described treacherous, squalid conditions that have left some in fear for their lives and others regretting their decision to come indoors.

At the 30th Street Intake Center, residents said toilet paper is so hard to come by, they have to wipe themselves with blankets and sheets.

At the Tillary Street Women’s Shelter, which houses mentally ill adults and those with substance abuse problems, chaos is the only constant.

“You don’t get to sleep. You have to watch over your shoulder 24 hours,” said Lauren, 34, a mom of three who is trying to get back on her feet at the Downtown Brooklyn facility after a six-month stint on the streets. “If you are not with your stuff every day, it’s gone … Some people lock up their bedding until they come back to make sure it’s still there.”

She continued, “They shouldn’t send people here … I feel like I’m back in jail… [Adams] really needs to clean the place up before he sends them here.”

Sandra, who is in her 40s and is also living at the Tillary Street shelter, said weapons and drugs are constantly smuggled in, mentally ill residents aren’t given their medications and police are called to the facility almost everyday because of incessant fighting between clients.

“I feel like somebody is going to beat me up or kill me in there. I don’t look at nobody. I walk with my head down,” Sandra said.

“I left and I just came back in June because I was afraid for my life in there. I went to my girlfriend’s house. I wanted my own place so I had to come back.”

Shireen Abbar, 26, said she ended up at the Tillary Street shelter after she was labeled an “emotionally disturbed person” following a dispute with another resident at a different facility.

“I’m sleeping [in a room] with someone who is standing over me for hours,” said Abbar, who works for a cell phone company and is going back to school. She added that she is not mentally ill or facing substance abuse issues.

“She just stands there and stares at people. Yes, I am afraid. That’s crazy.”

At the Bedford-Atlantic Armory shelter in Crown Heights, long known as one of the most dangerous facilities in the Big Apple, The Post had difficulties conducting interviews outside of the building because a mentally ill man kept lunging at a reporter and screaming at them. 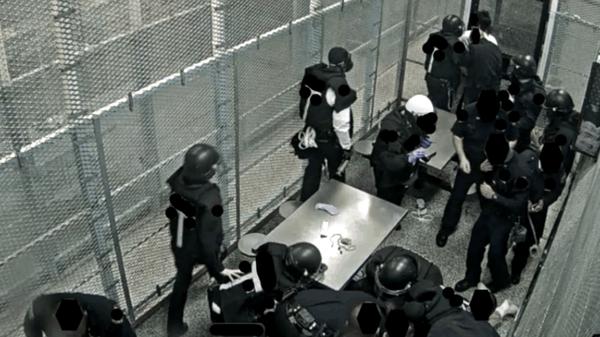 “I can’t wait to get out of here,” said Julio Liriano, 23, who works in construction part-time and has lived at the shelter for more than four months.

“The bathroom is always dirty. The dorm is dirty. There are cockroaches, mice, everywhere. You might wake up and there be a mouse on your bed saying good morning,” Liriano explained.

Lincoln Bunch, 52, said he’s been at the shelter for three months and the beds are the same used in city jails.

“They don’t give you towels all the time, they change bedsheets maybe once a month.”

He said “there are incidents every day” – fights, overdoses, deaths, assaults and thefts.

Some of the more violent cases at city-run homeless shelters have made previous headlines.

Last May, Stanley Castor, 39, was killed after fellow resident Patrick McDonough, 49, stabbed him repeatedly in the neck, shoulder and arm at a Times Square hotel doubling as a shelter, police said.

About a month earlier, Timothy Paz, 29, was stabbed in his chest and back, and slashed in the face and neck, by an agitated “drug addict” resident at a Midtown homeless shelter, court records show.

And in 2019, a 22-year-old homeless man living at an Upper West Side shelter was killed after a fellow resident, age 36 at the time, stabbed him numerous times in the chest, cops said.

‘It’s not the way we should be approaching shelter’

The Big Apple shelter system is comprised of more than 400 facilities – funded and supervised by the city – including those dedicated for families with children, couples and single adults.

The barracks-style facilities for single adults — some of which are literally built in old armories — have repeatedly come under intense scrutiny over safety concerns. But they still exist because New York is required by a decades-old court settlement to provide every homeless New Yorker with a bed, and the barracks facilities are usually the cheapest way to do that.

“We’ve been having this conversation about shelter security for years,” said Levin, who left the Council in 2021 after 12 years because of the city’s term limits law. “It’s not the way we should be approaching shelter.”

Jacquelyn Simone, the policy director of the Coalition for the Homeless, said the city needs to “redesign” the system so people feel “safer and more respected.”

“When we speak with people who are unsheltered on the streets, we find that many people have made a decision to avoid the shelter system because they do not meet their needs for safety and dignity,” said Simone.

The city’s Department of Social Services and Department of Homeless Services said more than 300 shelter sites that didn’t meet city standards have been closed and the agency started a “Shelter Repair Squad” in 2016 that’s conducted more than 63,000 shelter inspections since its inception. The initiative has sought to restore shelters through “aggressive repairs and renovations” and, as a result, violations are down by 95 percent, an all-time low, the agency said.

A DSS-DHS rep adamantly denied that life outdoors is safer.

“To all New Yorkers in need: sleeping on the streets is dangerous and under no circumstances safer than sleeping in a City shelter,” said spokesperson Isaac McGinn.

“The fact is that the health and safety of our clients is our top priority, which is why we have made unprecedented investments to address decades of underfunding and transform the shelter system, and we are constantly working to continue making improvements across our system.”

A City Hall spokeswoman said the Adams administration was committed to ending homelessness.

“We will continue to invest in providing quality shelters and services to help New Yorkers get back on their feet and put them on a path to permanent housing,” said the rep Kate Smart.

But despite the many investments and DSS-DHS’s whopping $2.1 billion budget for Fiscal Year 2022, an employee at the 30th Street Intake Center said the facility still isn’t any safer.

“It’s not a lot of security. There are seven floors of living space here, that’s a lot of people … You’re on your own,” the worker said.

“So yes, it may be safer for them on the street in some cases.”